My smartphone has an IR transmitter. With this I have already developed a remote control for my television. The aim is to control them by voice command. The MIT App Inventor has the SpeechRecognizer component. Unfortunately, this does not work continuously and emits an annoying tone at the start and at the end. The extension shown here works continuously and you can switch off the tones.

The UrsAI2ContinuousSpeech ZIP archive for download. The archive contains the source code, the compiled binary for uploading to the App Inventor and a sample application.

The sound can be turned on and off using the SoundEnabled property. To do this, the audio stream for system signals is muted, respectively the volume is reset. If the screen containing the component is cleared (onDestroy), the speech recognition is automatically switched off and the sound is switched on again. The end tone of the Android SpeechRecognizer is delayed. It is possible that Android switches the sound back on before the end sound is triggered. You can then hear the end tone.

Start and Stop start and stop the speech recognition. Unfortunately, the Android SpeechRecognizer component does not offer continuous operation. Internally, the speech recognition is restarted immediately after each cancellation until the call to the Stop function cancels this loop. There may be short recognition pauses lasting a few milliseconds before restarting. However, this did not have a negative effect in the tests.

Internally, the process is roughly as follows: 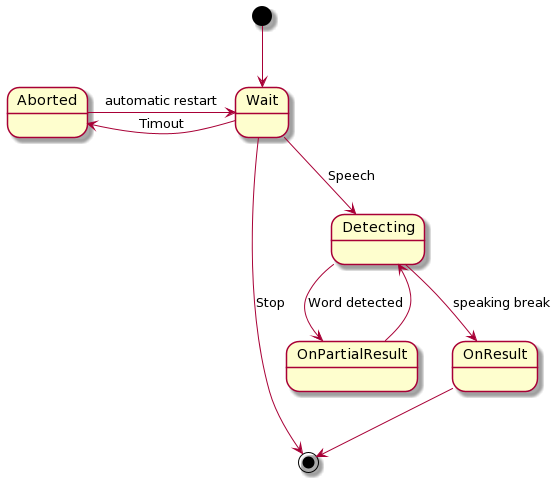 SoundEnabled
Switches the system tones on and off.
Version
Gets the version of the extension.

The speech recognition is done in the OnPartialResult event. This event provides the necessary data earlier than OnResult.

Only a few example commands and not the entire command set from the remote control example is implemented, .

The CheckCommand procedure evaluates of the results of the speech recognition:

Text is the result of speech recognition, Command is the command to be checked against, and Code is an index in a list of IR codes. If a hit is found, the speech recognition is switched off first. This is necessary because a voice output immediately follows that is not intended to serve as its own input. The CallAction procedure sends the IR code associated with Code. Finally, "ok" is output via the voice output.