1. Sending the line end identifier with a delay

The UrsAI2TcpClient ZIP archive for download. The archive contains the source code, the compiled binary for uploading to the App Inventor and a sample application.

The extension UrsAI2TcpClient allows to set up and operate TCP connections to a server. Text messages can be sent via TCP. The transmit takes place line by line. A line is terminated by an end-of-line identifier (CR, LF, CRLF). If such an identifier is recognized upon receipt, the characters received up to that point are reported to the application via an event.

The Connect method establishes a connection to the server that is specified by the RemoteAddress and RemotePort properties. ConnectTo does not use these properties, but uses the endpoint data passed as parameters to this function. 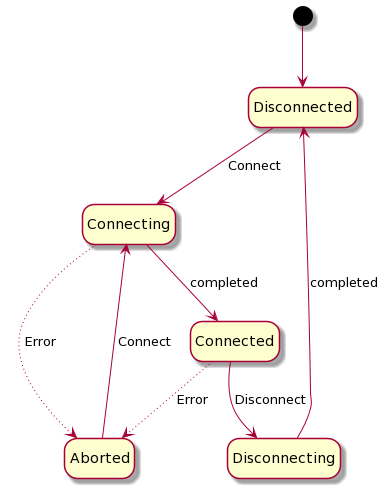 If the state of the extension does not allow a new connection to be established, the ErrorOccurred event is triggered with error number 4 ("Already connected."). 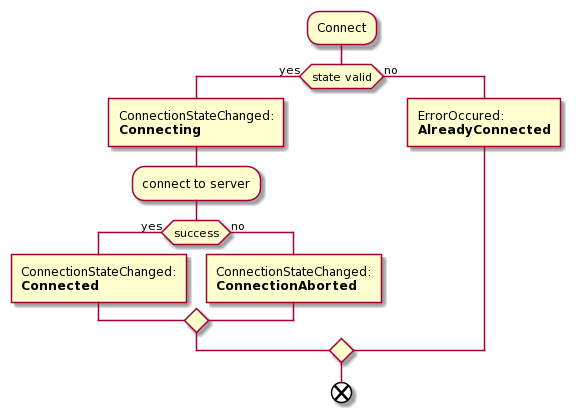 The Write and Writeln methods are used for sending messages. The character encoding, ie the conversion of the character string into a byte sequence, is specified by the Charset property.

Write writes the specified text into the output buffer. It is not guaranteed that the message is transmitted immediately.

Writeln writes the specified text into the output buffer and adds a line end identifier. The type of the end-of-line identifier depends on the LineDelimiterCrLf property. If true, CRLF (0x0D + 0x0A, for Windows-based servers) is appended and if false, only LF (0x0A) is appended. Then the OutputStream.flush() method is called internally, which forces the pending data to be sent.

Both methods first check whether the state is Connected. If this is not the case, the instruction is ignored and the ErrorOccured event is triggered with ErrorCode 3 ("Not connected to a server.").

The data is read in in an (endless) loop in a separate thread. The incoming bytes are decoded into texts using the Charset property and collected until a line end identifier (CR, 0x0D, LF, 0x0A or CRLF, 0x0D + 0x0A).) is received. The LineDelimiterCrLf property is not evaluated here. If an end-of-line identifier has been received, the characters collected up to that point are reported to the app without the end-of-line identifier via the MessageReceived event.

If the receiving thread terminates because of an error, the connection is terminated with the ConnectionStateChanged:Aborted event.

In the Android environment, all network functions must be carried out in a separate thread. This is necessary so that the user interface does not freeze during long-term operations, e.g. because of bad connections. This has an impact on the triggering of events. They are not triggered directly, but via a Handler instance. The detour via Handler.post(...) shifts the execution from the separate thread to the GUI thread.

This has the consequence that the current AI2 block is executed to the end before the events are triggered. In the following constellation

the DoSomething procedure is called first before either of the two events is triggered, which report the success of the call to Connect. So the procedures HandleErrorOccured and HandleConnectionStateChanged are executed after DoSomething.

The same applies to all events of this extension.

With a TCP connection, it should actually be guaranteed that data is either sent correctly or an error is reported. Unfortunately, this is not the case with the Java implementation - at least the one on my smartphone (Java 7). Disconnections are only recognized after two write operations with a sufficiently long time interval (see  java-detect-lost-connection). This also applies when the remote terminal properly closes the connection (disconnect, close,...). The time interval is necessary because the Nagle's algorithm cannot be switched off (see Java Socket Option TCP_NODELAY). The call to OutputStream.flush() does not change this beavior, thow it should trigger an immediate dispatch.

This extension offers two possibilities to detect disconnections with a high probability.

1. Sending the line end identifier with a delay

This mechanism reduces the data rate and increases the latency times. The decision must be made between security and performance.

The TestConnection method sends two characters specified by the IgnoreTestChar property with a time delay (see above). The test character must be ignored by the recipient. Usually an invisible character is used. The character is specified as a numeric character code. The default setting is 6 (ACK, Acknowledge).

If the connection is interrupted, sending the second character triggers an error and thus the ClientDisconnected event.

RemoteAddress
Host name or IP address of the server.
RemotePort
Port for the TCP connection.
Note: The default value is empty. If no value is entered, AI2 reports: "is not a legal integer".

LastAction
Name of the last action, e.g. "Connect".
LastErrorCode
Error code of the last error that occurred (see below).
LastErrorMessage
Text for the code, e.g. "Invalid State."
LastExecptionCause
Text of the Java exception that triggered the error.

Note: The use of UrsAI2SharedTcpClient is not possible in the Companion. Companion does not provide all functions that are necessary to operate this extension.

This variant of the extension (UrsAI2SharedTcpClient, included in the download) uses a static (Java static) connection component, i.e. all instances of the extension in different screens of an app use the same objects. This also means that there can only be one connection in the app. The use of several instances on the same screen leads to errors when triggering the events.

There are no designer properties available. Designer properties don't make sense. A second instance of the extension (in a second screen) would overwrite the set values ​​of the first instance. So you have to make sure that the same values ​​are entered in the designer in all screens at all times. Since usually only the IP address (or the host name) of the server and the port to be used have to be set and that only in the first screen, the additional effort is minimal.

The ConnectionStateChanged and DelayedConnectionAborted events are forwarded to all instances of the extension on all screens. MessageReceived and ErrorOccured are only triggered by the instance on the currently visible screen. 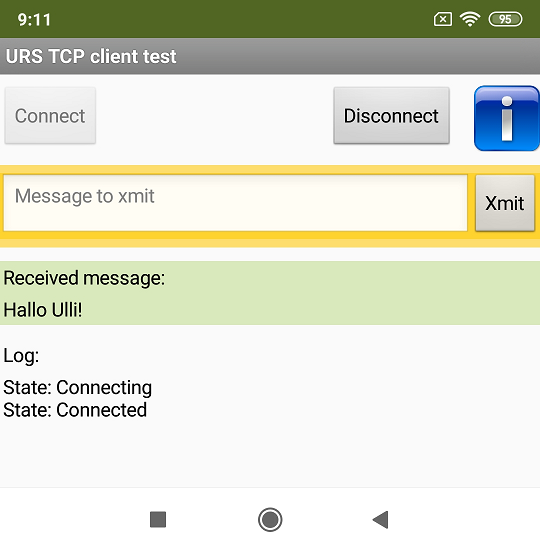 Note: Appropriate endpoint data must be entered in the Designer. 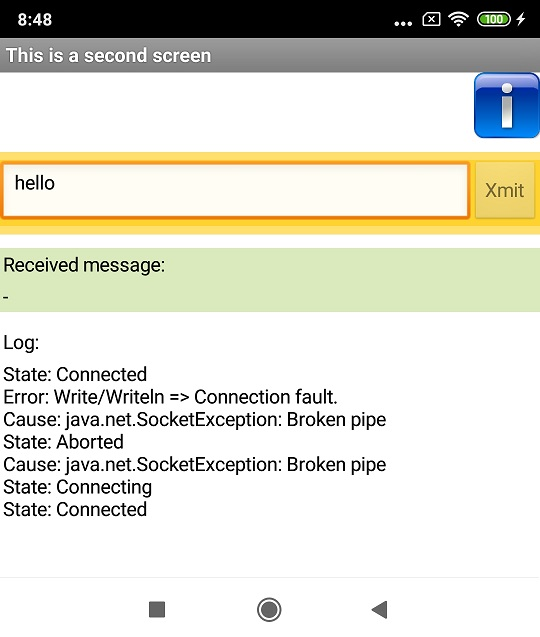 The first screen implements a function to re-establish the connection in the DelayedConnectionAborted event. After a short time, the message "State: Connecting" (line 6) appears without any further action. In the meantime the server was switched on again, so the connection could be re-established (line 7).

To try out the example, the IP address or host name of the server and the port to be used must be entered in Screen1 at the Initialize event.

I have gathered some tips for creating your own extensions: AI2 FAQ: Developing extensions.

The diagrams were created with PlantUML.