With version 6.0 (Marshmallow) Android introduced Doze mode to optimize battery life. If no app is actively used, this function gradually switches down everything  (display, CPU, WiFi, etc.). The WakeLock function has also been partially disabled.

The MIT App Inventor has no functions to prevent the shutdown. You can use the Clock component as a timer and also set the events to be triggered in the background (TimerAlwaysFires). With my smartphone with the Android version Oreo 8.1, however, what could be done within a timer event is very limited. Network functions, for example, are not available

With the extension described here, you can ensure that the CPU is not switched off and the app remains active for a long period of time.

A lot of useful background information can be found in the ZEBRA Developer Portal: Keeping your Android application running when the device wants to sleep.

The UrsAI2WakeLock ZIP archive for download. The archive contains the source code, the compiled binary for uploading to the App Inventor and a sample application.

In principle, there are three use cases:

Android offers the following possible solutions for these cases:

Android has changed its power management policy many times. So you should definitely test whether the information given here applies to your own project.

A Wakelock does not protect against the network connection being cut after a certain period of time. The WifiLock enables an application to keep the WLAN connection active. Typically, the WiFi hardware is turned off when the user has not used the device for a long time. If a WifiLock is set, the hardware keeps switched orunning until the lock is released.

The RequestIgnoreBatteryOptimization method asks the user to switch off battery optimization for the app. After calling the method, this request appears:

AcquireCausesWakeup
Turn the screen on when the wake lock is acquired.
IsActive
Indicates whether a WakeLock is active.
IsIgnoringBatteryOptimizations
Indicates whether the app is on the whitelist.
Since SDK version 23 (Marshmallow 6.0.1). Previous versions return false.
IsRunningInCompanion
True if the app is running in the companion.
OnAfterRelease
When this wake lock is released, poke the user activity timer so the screen stays on for a little longer.
Version
Gets the version of the extension.
VersionSDK
Gets the running Android SDK version.
WakeLockType
Returns the type of the currently set WakeLock.
0: no active WakeLock
1: PARTIAL_WAKE_LOCK
2: SCREEN_DIM_WAKE_LOCK
3: SCREEN_BRIGHT_WAKE_LOCK
4: FULL_WAKE_LOCK

Android allows the energy-saving mode to be switched off specifically for individual apps. Here are the instructions for my smartphone (Xiaomi Redmi 5 Plus) with Android Oreo 8.1:

A small sample app shows how to use the extension (see download). 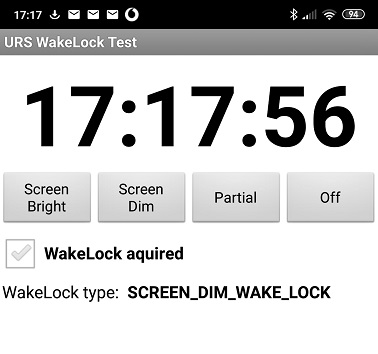 A running clock is displayed in the upper part. In order to be able to control an app running in the background, a broadcast packet is sent every ten seconds via UDP with the current time.

I tested the following scenarios with the example app.