This example shows how a reminder function can be programmed. It is intended to induce the user to open the app regularly.

The app has four states: :

The app has no function. It can only be switched off.

The following instances of the components are used in the project.

The code isn't very difficult. It consists of a procedure that creates an alarm or postpones an existing alarm. This function is called once when the app is started. An new alarm is generated or an existing one is adapted. This function is called up a second time, controlled by a timer, before the alarm time has expired. This adapts the existing alarm so that it is not triggered. The time of the alarm is adjusted again when the app is (actively) closed.

Indeed there are two alarms. The second iks triggered with twice the delay time. Both alarms must exist separately from each other, so they require different IDs (RequestCode). The second notification is intended to update the first. For this to work, both notifications must have the same ID (NumberID).

The global variable Delay holds the value for the delay for the alarm time (here 10 seconds after closing the app). The timer is set to a time significantly shorter (2 seconds) than the delay time. Shorter times would be possible, but would stress the system. Any notifications that have already been displayed will are deleted. Finally, the alarm is created or an existing one is adapted.

Update of the alarm time

The alarm time is updated regularly and when the app is closed. 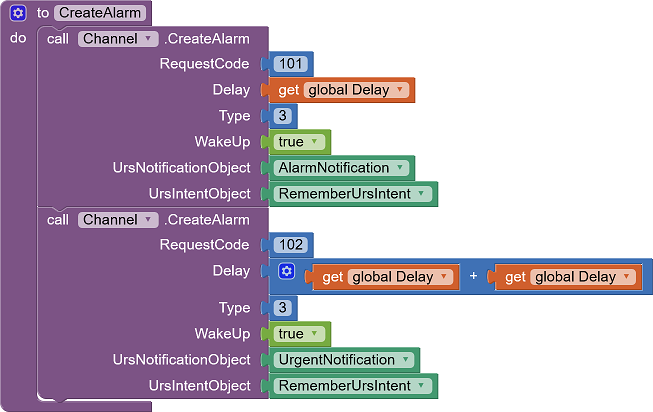 Strictly speaking, there are two alarms. The second is created with twice the delay time.