For a project, an Android app should be developed that communicates with an ESP8266 (project). For easy development of the app MIT App Inventor 2 was chosen.

The IP addresses of the available ESP8266 devices should not be fixed in the project. The app should itself determine which devices are currently active and which are the addresses they can be addressed from.

To accomplish this task (name service), you can use the broadcast function of UDP. You simply send a broadcast datagram to a previously agreed port to all devices on the local network, requesting their connection data. The devices that are listening on the agreed port then return their IP and possibly further data to the sender. The sender collects the answers and thus knows all active devices. Because UDP packet delivery is not guaranteed, it's a good idea to repeat this process and use the union set of responses.

In order to be able to address the devices of a project in a targeted manner, you either agree on different ports or you enter a device identifier in the response. The receiver then filters out those devices it is interested in.

The problem is: App Inventor has no built-in UDP and I have found no working extension. So do it yourself. 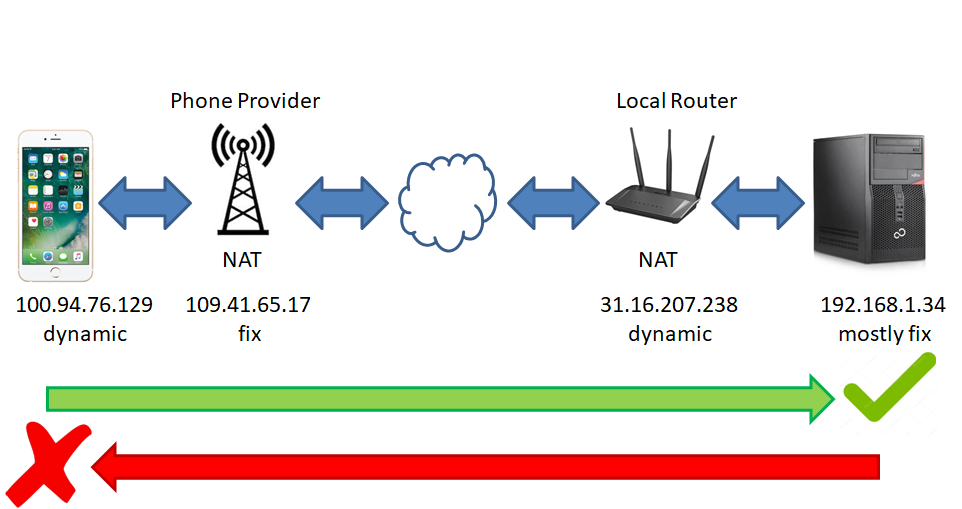 A device in your own LAN can be reached from outside via port forwarding on your own router (if necessary via DDNS). You won't be able to influence the provider's router. So sending from the smartphone to a device in the LAN works, the other way around is not possible.

The same also applies to TCP. If the smartphone is only connected to the cellular network, the connection can only be established from the smartphone. The device in the LAN must act as a server, it waits for an incoming connection request. The smartphone acts as a client, i.e. it initiates the connection. Once the connection has been set up, the routers have coordinated internally of addresses and ports. The data transfer is then possible in both directions.

Some devices that are controlled via UDP respond to the sender with. The use as destination address that address from wich the packet was received. So that this packet can be received, the sending and receiving addresses of the app must be the same. The parameter LocalPort (= port on which the data is sent) must not keep the default setting 0, but must be set accordingly.

The ZIP archive UrsAI2UDP for download. The archive contains the source code, the compiled binary to upload to App Inventor and a sample application.

The extension contains two components. If it is imported into an App Inventor project, two entries appear under the "Extension" heading.

UDPListener is a component that listens to incoming datagrams and makes them available to the project. UDPXmitter is used to send datagrams.

Some more detailed information about UDP can be found on my page .NET UdpClient: Aufs Bit geschaut. In particular, the sections on addressing schemes and the Java interface are also relevant for Android.

In technical applications or when controlling devices, it is often necessary to work with binary data. With version 4.3, the sending and receiving of binary data  has been significantly simplified via the UrsAI2ByteArray extension (see also example UDPBinaryTest).

Four different methods have been implemented for sending datagrams. They should reduce the size and number of the necessary program blocks in App Inventor. Many and large blocks quickly make an AI2 project confusing.

The destination address is often the same. For these cases, the target address data (RemoteHost, RemotePort) can be stored in designer properties. Xmit and XmitAsync send to the addresses stored in the designer. This keeps the blocks small. Practically only one "line" is necessary.

XmitTo and XmitToAsync allow the destination address to be specified independently.

The methods also differ in the type of error handling. Those with the ending "... Async" acknowledge the sending of a message with the events AfterXmit and XmitFailure. AfterXmit is triggered after every transfer. If you are only interested in error situations, use the XmitFailure event , which is additionally triggered in case of an error. The other two methods return the error codes as return values.

It is usually not necessary to specify the local port from which datagrams are to be sent. Should this be necessary in special cases, the local port number (LocalPort) can be defined in the designer. If the value is "0" (the default value), the system looks for a free port for sending internally.

Of course, all designer properties can be overwritten per block.

Three details are required to send a message: destination address, sender address and the message itself. Network addresses consist of two components: IP (address) and port (number). The port is usually connected to a certain service (see also Wikipedia: List of TCP and UDP port numbers).

The devices that communicate with each other on the network are called "endpoints" or "hosts" (it is not exactly the same, but the terms are often used equally). So the sender is named "local host " and the recipient called " remote host".

As a rule, there is no need to worry about the sender address. If you do not make any entries, the extension uses the address "0.0.0.0:0". This address means that the system (more precisely the "service provider", i.e. the network firmware) can choose a network interface with which it can reach the destination address. It also looks for any free port.

If you want to specify the sender address in special cases, you can do this via the LocalPort property . An Android device usually only has one active network interface at a time. This is either the mobile data connection or the WiFi. Therefore a selection of the local network interface was not implemented.

The destination address must always be specified. This is done either via the designer properties RemoteHost and RemotePort or as a parameter in the Xmit... method.

With RemoteHost either an IP address or the name of the recipient can be specified (eg "www.google.de"). The extension tries to determine the associated IP. For the designer property RemoteHost, the result of the retrieval is shown in the property RemoteIP. If the IP could not be determined, RemoteIP is empty. Sending to this host is then not possible (will lead to the UnknownRemoteHost (Code 1) error).

Since IP addresses change very rarely, the IP belonging to a host name is only determined when the name is entered. If the UnknownRemoteHost (Code 1) error occurs unexpectedly, you can try to set the RemoteHost property again. The associated IP address is then redetermined.

In the AI2 apps, messages usually consist of texts. Non-text information is converted into text:

Numbers are converted into texts. The recipient receives the four digits "1234".

Lists are transferred to the JSON format. The recipient receives the string [1234, "Ulli"] .

However, some receivers require certain byte sequences, for example byte 123 (Hex 7B) and not the character string "123". If binary mode is switched on, the message is interpreted as a comma-separated sequence of byte specification and the message is sent as a byte sequence (details see binary data).

XmitData is an instance of the  UrsAI2ByteArray extension. This is the last item in the block overview:

The datagrams are received via the UDPListener component. After starting, this component checks in a continuous loop whether datagram packets have arrived. Received datagrams are published via the event DataReceived.

The UDPListener component has the two methods Start and Stop, which start and stop the listeneing to UDP datagrams. There are two events: DataReceived is triggered when a datagram has been received, ListenerFailure indicates that the receive loop was terminated due to an error. The isRunning property can be used to query at any time whether the receive loop is active.

UDP allows Broadcast messages to be sent. In this case datagrams sent by the app itself are also received. The property DropSentToYourself is used to filter out datagrams whose sender is your own IP address.

Opening a second screen does not interrupt message reception! The first screen still receives the events DataReceived and ListenerFailure. The blocks associated with the events are executed when the event occurs. If this is not desired, the listener must be stopped before opening the second screen and started again after returning.

The extension cleans up when a screen is closed, i.e. stops a running listener. Ultimately there are no running listeners left. But cleaning up is delayed in the background.

the listener in the second screen must definitely be stopped before the screen is closed.

It is important that the BackPressed event is captured on the second screen :

In the AI2 apps, messages usually consist of texts. In some cases, however, the datagram consists of a sequence of any bytes (byte array). If you switch on the BinaryMmode, the received bytes are not converted directly into text. The individual bytes are presented as decimal numbers separated by semicolons.

To receive byte arrays, the ReceivingByteArray property must be assigned an instance of the UrsAI2ByteArray extension. This can be done in the designer or via an instruction block.

RcvData is an instance of the UrsAI2ByteArray extension.  This is the last item in the block overview:

When a UDP data packet (datagram) arrives, the received data is copied into the specified UrsAI2ByteArray instance too. Then the DataReceived event is triggered. The data is only available in the UrsAI2ByteArray component as long as the code execution is in the DataReceived event. If the event method is exited, the data might be overwritten by other received packets.

With version 4.3, the sending and receiving of binary data  has been significantly simplified via the UrsAI2ByteArray extension (see above).

If BinaryMode is set to true method Xmit accepts a string with coded bytes, separated by comma (‘,’) or semicolon.

This algorithm is used for the conversion:

If BinaryMode is set to true, the received packet is translated into a semicolon separated string of decimal numbers. 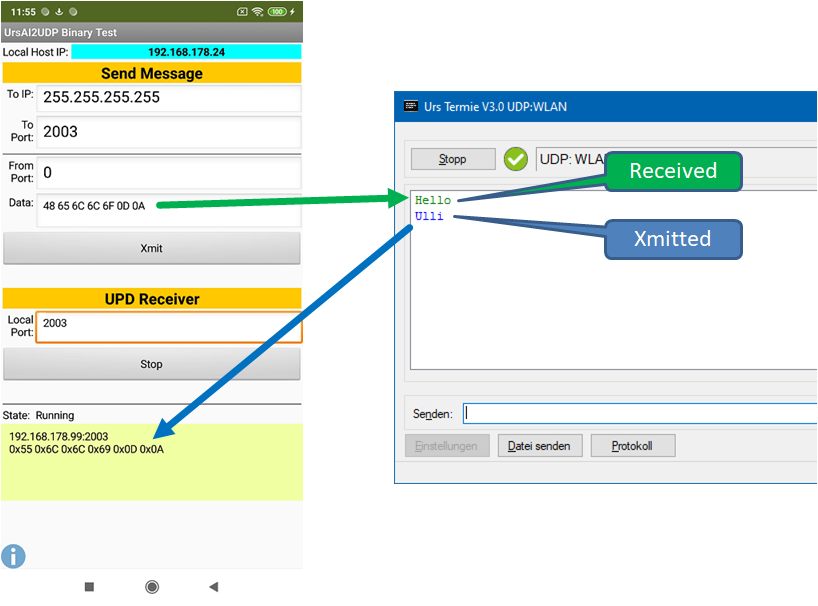 In the Data field, the bytes to be sent are specified as a sequence of two-digit hexadecimal numbers separated by spaces (without a leading "0x"!). In the example these are the ASCII codes for the text "Hello<CRLF>

The text input is transferred to the UrsAI2ByteArray component using a procedure:

The extensions are developed with Java. A tutorial on datagrams can be found in the Oracle Java documentation. There you will also find information about the DatagramSocket class used.